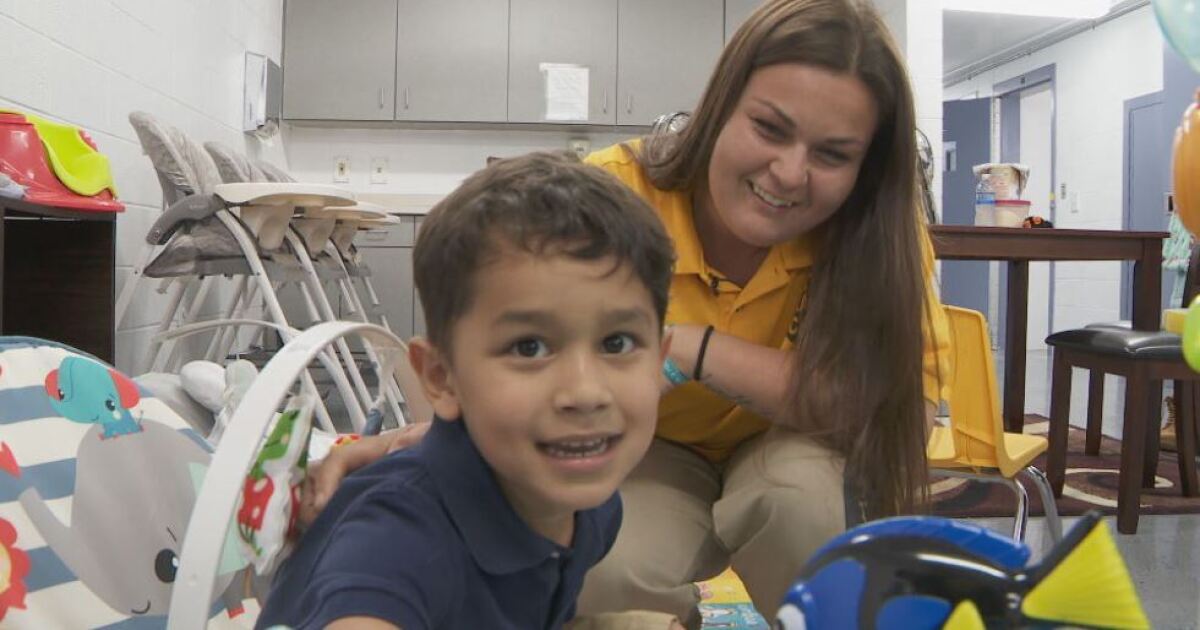 The program became the first of its kind in the United States in 1989 and remains one of only three or four states to implement one.

“You have to take classes, you have to have a parenting class to go there, you have to be free to write to go visit. Once you’ve broken the rules, you have to wait a few months and let the writing go down and then you can start over. It really gives them something to look forward to,” said Sergeant Veronica Hunter of TDOC Debra K. Johnson Rehabilitation Center, who has seen the program in action for 16 years.

The visitation program allows eligible mothers to spend two weekends each month with their children in a repurposed overnight facility for children and their mothers. The program in Nashville only applies to children 6 and under.

Bethany Wilson began her sentence in April 2019 when her son was just 19 months old.

“If I haven’t done anything right in life, like him, I’ve done well to him,” Wilson said.

When COVID hit, she had only seen her son once in seven months.

“It seemed like for months and months they kept saying, like, he [COVID] wasn’t getting better and I just started to feel really depressed because I had never really been away from him until I was locked up,” Wilson explained. end of 2021. They were always saying it didn’t look good…it was just very difficult.”

While the program was suspended for nearly two years, Wilson’s relationship with her son was limited to phone calls.

“He was young. So I was talking to him and reading books to him and I prayed a lot during that time. And I just prayed that he wouldn’t forget me,” Wilson recalled. “He wasn’t even talking at the time. So it was just a lot of one-sided conversation, but he was hearing the voice he was hearing my voice.”

At the end of 2021, Wilson and his son were finally reunited – his then 4-year-old son.

Since then, maintaining good behavior has allowed Wilson to continue seeing his son two weekends a month, including on Mother’s Day.

“It would be the best Mother’s Day gift I’ve had in all the time I’ve been locked up to be able to see him and spend it with him,” Wilson said with a smile. “One thing about children, they always know who the mothers are, they’ll never forget that. They’ll never forget that. And you should never sit down and be okay with not caring. of your children.No matter it is phone calls, letters, you should keep pushing for your relationship, your children no matter what. And no matter where you are, you are still a mother , so if you’re not in their life, you should still behave like a mother because that’s what you should be doing as a mother for your children.”

Hunter said that in her 16 years she has seen countless success stories.

“It helps. You can stay on track. You know, it’s like one day at a time, so they’re out there tearing and running. Because ‘I have responsibilities. I work when I get off, I have to take care of my child, I have to take him to daycare. So it really gives them something to look forward to when they go,” Hunter explained.

Helping incarcerated mothers get into the right headspace to be a mother is a priority for Hunter as it is paramount to their success when they are released.

“The relationship is already built because you started here, even if you locked yourself in. When you go out, you know what to expect and how the child acts. It’s not like it’s something new,” Hunter said. “They’ve seen you, so we’ve had a lot of women come home and they’re doing great. The kids are with them. You can get your kids back. So they know exactly what to expect.”

Wilson is expected to be released later in 2022, but said she was grateful for the night program in the meantime.

The macabre crimes of “the man with a thousand faces”