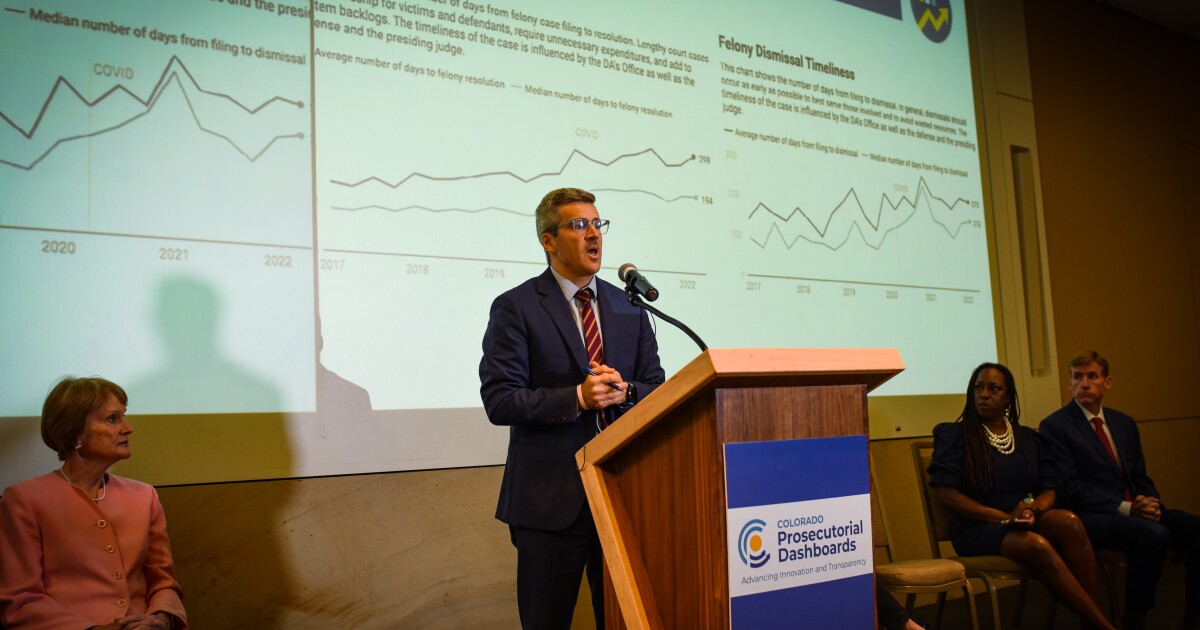 Colorado prosecutors take steps to even the scales of justice

For the first time, Colorado prosecutors are giving the public a window into their work. They have posted data dashboards online to show metrics such as the racial and ethnic makeup of the people they are prosecuting and how long a person is waiting for their day in court.

Alexis King, district attorney for Jefferson and Gilpin counties, said she has long wanted to measure bias in her office, especially given the number of files on her desk with Latino surnames.

“I didn’t know how to quantify it, how to recognize any impact, or how to start a conversation to resolve the disparities,” King said at a recent press conference in Denver.

This is the largest effort of its kind in the country, and the ultimate goal is for offices like King’s – which have never had access to this data before – to identify the patterns and work to fix them. In this field, data is everything.

There are, however, caveats to the data. For one thing, it doesn’t include population demographics, which proponents say provides important context. The overall Hispanic population of Jefferson and Gilpin counties is 15% and less than 1%, respectively. This means that the prosecution rate for Hispanics reflects major disparities.

Officials emphasize that the goal of the data dashboards in their initial phase is to start a conversation and give people a better idea of ​​who is entering Colorado’s criminal justice system.

“One of the most important things is to track the disparities we see. And I say that as a data person,” said Seleeke Flingai, senior researcher at the Vera Institute of Justice. The independent think tank focuses on ways to improve the justice system.

“Knowing the problem from a data perspective can help inform any slew of policies coming out of the community,” he said.

Prior to the data dashboards, the Vera Institute was already working with Boulder County. Researchers analyzed thousands of cases between 2013 and 2019 and found that blacks and Hispanics were more likely to face charges, convictions and incarceration than whites. Meanwhile, homeless people accounted for a disproportionate number of cases. Flingai said it’s not unique to Boulder County.

“I think it’s a combination of a lack of housing options, supportive housing for people, and I think a general desire to kind of hide the issues in our society,” he said. . “And so the criminal justice system, unfortunately, has played a major role in that across the country.”

Boulder County District Attorney Michael Doughtery welcomes the review. He chose to work with the Vera Institute, he said, and he volunteered to be a pilot district for the data dashboards project.

“Rather than just saying, ‘It’s not our fault, we have the hand that was dealt to us,’ I think we have a responsibility and an obligation to do our best to identify racial inequities in the justice system and then to root them out,” Doughtery told KUNC.

An example is how Dougherty the office deals with adult diversion. This is an area where there are strong racial disparities. Diversion rates are 69% for white defendants, 19% for Hispanics, and 4% for black residents.

The disparity is less pronounced among juvenile cases with 63% of white cases and 30% of Hispanic cases diverted. So the Boulder DA is pushing — or diverting more young people of color — into other programs to keep them out of detention centers.

“So what we’ve realized is that we should have the same screening method for minors and adults,” he said, “because what we do with adult cases, it is that our approximately 40 prosecutors use their own discretion to determine whether a case is appropriate for embezzlement or not”.

In other words, with 40 prosecutors, you’ll likely have 40 different approaches and philosophies, Dougherty said.

Dougherty holds weekly town hall meetings so people can ask questions about the data displayed on the dashboards. Raising public awareness is one of the researchers’ intentions for this project.

“What we really pushed was for each office to look at their data and do some interpretation and critical thinking,” said Laura Gase from the Colorado Evaluation and Action Lab at the University of Denver, the lead group working on data dashboards.

Numbers for a new era

In Fort Collins, District Attorney Gordon McLaughlin is also focused on engaging the community with this data — and how he can use it to reduce disparities and keep people out of the justice system.

“One of the reasons I came to this office is to try to figure out what’s most effective and to understand that the traditional thoughts of, you know, throwing people in jail isn’t necessarily the most effective way,” McLaughlin said.

McLaughlin has already started making changes based on what he learned from the data dashboards. One thing that strikes him is how long people have been waiting for answers on their cases.

“Most jurisdictions, including us, found when we looked at the graph of our data set, going back to 2017, that cases were taking longer and longer to resolve,” he said.

The result is delayed justice for victims, delayed accountability for defendants, and a longer delay before they are connected to the resources they need.

McLaughlin dug deeper into these new numbers and brainstorming solutions. One area of ​​focus is when he makes misdemeanor offers to defendants accused of crimes.

Prosecutors McLaughlin and Dougherty are Democrats who are quick to recognize the social justice component of their work. They both said the killing of George Floyd was a watershed moment. This has compounded the lack of public confidence in the justice system and intensified community demands for transparency. The search for this data is directly related to this.

But the new dashboards are a bipartisan effort.

In one of the fastest growing areas in the state, Weld County Attorney Michael Rourke said his office lacked the resources to participate in the pilot phase. But the Republican is on board for the next one, which researchers will begin soon. District attorneys are responsible for selecting the categories of data they release, and Rourke already has some data points in mind.

“I think one of the most important things the community would want to know, based on my interactions with my community, is how are we doing racially, implicitly biased, of an external bias?” Rourke said.

Like other DAs and researchers, Rourke said shedding light on potential disparities is just the first step — the first in many when it comes to working toward a truly blind justice system.

PEER: Offender Data and Records Management by the Mississippi Department of Corrections