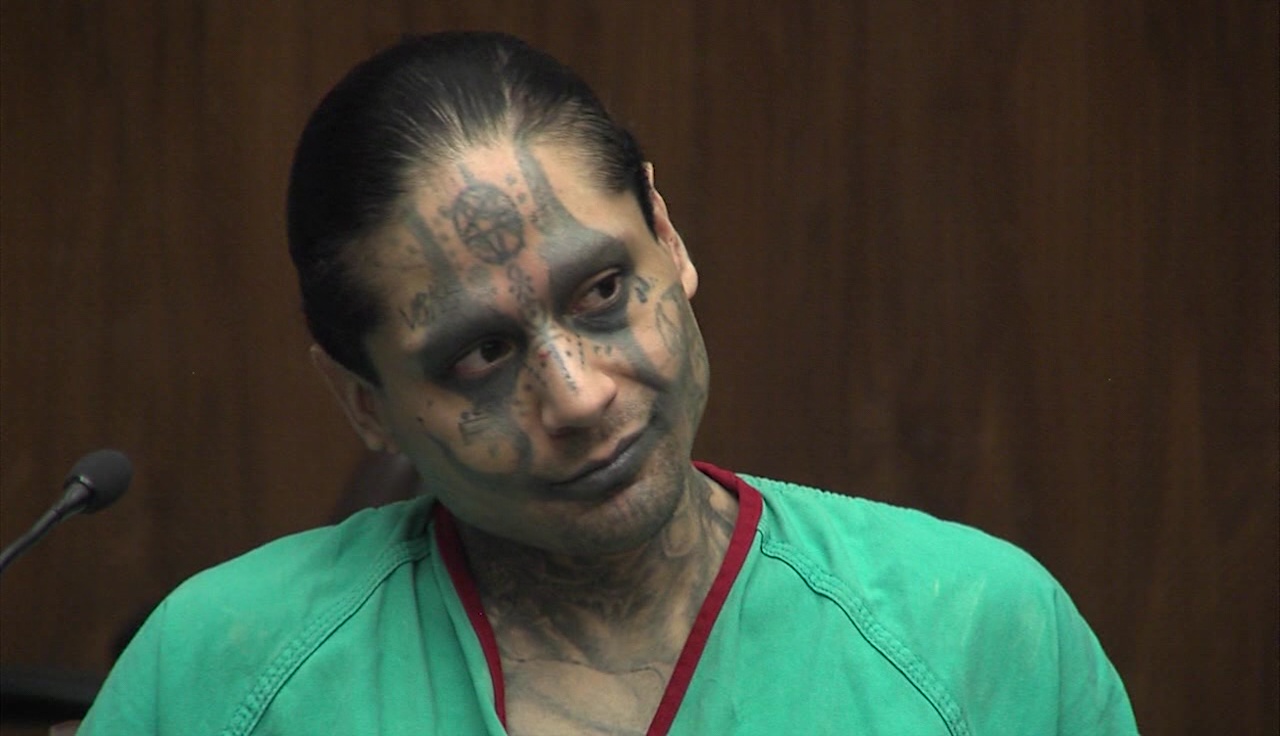 The macabre crimes of “the man with a thousand faces”

BAKERSFIELD, Calif. (KGET) — There are dozens of murders in Kern County each year, but the murder of Yvette Pena at a Bakersfield motel has received particular notoriety.

His murder in 2011 stood out not only for its horror, but also for the tattooed, remorseless man who eventually admitted to committing it.

Jamie Osuna, 34, has a “Joker” smile tattooed on his face and a pentagram on his forehead. There’s barely a spot on his face that hasn’t been touched by the ink.

In interviews with former KGET reporter Olivia LaVoice, Osuna described the thrill he felt killing Pena, whom he admitted to torturing and received a life sentence without parole.

“I recognize myself as someone who is not afraid to have fun without the consequences and let society shape it, as laws change and society changes, people change with it,” said Osuna to LaVoice before the trial began.

For Osuna, murder is a rush. And it is alleged that after Pena’s death he got into it again.

Where are the boys? The tragic disappearance of 2 children from California City

KGET has previously chronicled Osuna’s crimes in extensive media coverage and in the “Man of a Thousand Faces” podcast.

Why a thousand faces?

First, Osuna has steadily added to his tattoos, becoming almost unrecognizable since his first court appearance a decade ago. Each new piece of ink changes its look, sometimes subtly, sometimes drastically.

The difference between its current appearance and that of ten years ago is extraordinary.

Second, Osuna took the name on himself, writing it in blood on the walls of his cell. Read on to learn more about this disturbing scene and other details of his heinous crimes.

On November 13, 2011, police were called to reports that a body had been found in a room at the El Morocco Motel in Bakersfield. Pena, a mother of six who had fallen on hard times and lived in the motel, had suffered numerous gruesome injuries.

Prosecutor Nick Lackie did not go into detail about what was done to Pena, but said she suffered “really horrific” injuries.

Police arrested Osuna five days later after surrounding an apartment where he was staying in west Bakersfield. He pleaded not guilty to first-degree murder, among other offences, and his case slowly worked its way through the court system.

In 2017, Osuna agreed to an interview with LaVoice. The journalist was stunned when, instead of denying further, Osuna admitted to killing Pena and said he was going to plead guilty.

He stressed that he was not doing this to save Pena’s family from the pain of a long trial where disturbing photos would be posted; he just preferred to go to jail rather than stay in the county jail.

On May 14, 2017, Osuna was sentenced to life without parole during a hearing in which he mocked Pena’s family, smiling and rolling his eyes as they described in court the torment he had suffered. Osuna had inflicted on them. He gave a thumbs up when Judge John S. Somers handed down the sentence.

Those who expected even an iota of remorse were disappointed; Osuna looked amused, as if enjoying the attention.

The deputies took him away. Within days, he was transported out of Kern County and placed in the custody of the state Department of Corrections and Rehabilitation.

It won’t be long before he’s garnering media attention again, this time nationwide.

Osuna was transported to Corcoran State Prison in Kings County. He eventually received a cellmate, Luis Romero, 44, who had spent more than two decades in prison for fatally shooting a woman in Los Angeles.

On the morning of March 9, 2019, Corcoran guards checked their cell and made a shocking discovery: Romero had been decapitated, one eye stabbed, and other body parts removed; Osuna wore a necklace made from his cellmate’s body parts.

“Hahaha” was written in blood all over the walls. Also written on a wall was ‘man of a thousand faces’.

If Osuna wanted attention, he got it. Her picture has been seen around the country in articles detailing Osuna’s horrific crime and criminal history.

Kings County Assistant District Attorney Phil Esbenshade called the murder the most gruesome case he had ever seen. He said a weapon found in the cell appeared to have been made from a razor with string wrapped around it.

The following month, Osuna pleaded not guilty to murder and other counts.

A series of Kings County Superior Court hearings have taken place, many of which deal with Osuna’s ability to stand trial. Whenever he appears in court – a number of hearings have been held remotely due to the coronavirus pandemic – he is surrounded by deputies.

During a hearing, in May 2020, Osuna interrupted the judge and the lawyers.

“I don’t want a preliminary hearing,” Osuna said. “I want to plead guilty to murder.”

He made an unusual request: He asked for possession of all crime scene photos. Superior Court Judge Randy Edwards denied Osuna, saying there was “no compelling reason” for him to have them.

Edwards cited the California Department of Corrections and Rehabilitation’s long-standing policy prohibiting inmates from possessing crime scene photos due to security risks, and noted that Osuna had seen the photos before and might ask. to see them again.

The judge said there were 205 photos taken from the crime scene and 67 autopsy photos. Almost all of them are “extremely graphic or violent”, he said.

Osuna refused to speak to psychiatrists, but in January 2021 he was deemed incompetent to stand trial after reviewing hundreds of pages of medical records, including mental health records, which had been turned over by the CDCR.

Dr. Brandi Mathews told the hearing that reports indicated Osuna was suffering from heightened paranoia. He refused to take medication, never left his cell again and believed people were “setting him up”, she said of the reports.

“There were documents to support that with the decrease in medication there was an increase in his psychosis,” she said.

Mathews and another psychiatrist, Dr. Kevin Perry, determined that Osuna did not understand the criminal case against him and could not assist his legal team in preparing a defense.

Months later, psychiatrists discovered that he had regained his abilities. A judge has yet to rule on that finding due to a series of delays, the last of which came on June 2, when Osuna fired his lawyers.

His new attorney, Hugo Gomez-Vidal, must now review court documents and medical records and decide whether he disputes psychiatrists’ findings that Osuna is competent.

The next hearing is scheduled for July 22.

Romero’s death raised a number of questions, perhaps the most compelling being how Osuna managed to perform the decapitation and other gruesome injuries without anyone noticing.

A report last year from the Office of the Inspector General provided an answer: the guards in charge of doing the cell checks lied.

According to the Inspector General, two guards allegedly falsified reports claiming to have seen Romero alive during their rounds after his assassination.

“A third officer and a fourth officer reportedly failed to report that they each observed that the first two officers were not taking counts properly,” according to the report. “The first officer also allegedly lied
during his interview with the Home Affairs Office.

The report says the special agent who led the investigation failed to interview several key witnesses and did not investigate whether the agents correctly placed Osuna and Romero together.

A CDCR conference on the findings of the investigation was delayed, the report said, as was disciplinary action against the officers, who “entered into settlement agreements that reduce penalties without identifying new evidence, flaws or risks that would have justified the reductions”. ”

In response, CDCR issued the following statement: “Due to the extraordinary nature and complexity of this case, the department is committed to ensuring a thorough and comprehensive investigation from the outset. We respectfully disagree with the OIG’s assessment in this matter, as based on our investigation and findings, all disciplinary actions in this matter have been served within the required legal time frame. »

Dora Solares, Romero’s mother, filed a complaint against the prison sergeant who placed her son in Osuna’s cell.

In January, U.S. District Judge Dale Drozd ruled the lawsuit could proceed because it is plausible to infer Sgt. Joseph Burns and other unidentified guards at Corcoran State Prison “responsible for day-to-day implementation of cellmate selection decisions knew that Osuna should not be put in a cell with another inmate and, related, that it was because he posed a grave danger to others.”

The judge, however, dismissed Ralph Diaz, former secretary of the California Department of Corrections and Rehabilitation, and Ken Clark, warden of Corcoran State Prison, as defendants. The judge found that Solares failed to adequately establish the wrongful death and negligent supervision allegations against them.

Drozd found that Solares failed to establish that the warden could have foreseen that inmate housing procedures would be ignored.

The next hearing is scheduled for October 11.

In 2019, Romero’s family spoke to KGET after attending one of Osuna’s hearings. They expressed their anger and frustration at what they said was a preventable death.

“We are here because Luis is family, he is more than just a prisoner, another victim of Osuna, he is my mother’s son, my brother and we love him,” said Dora Garcia , the sister of Luis Romero. “We want to be here to represent the family and to let everyone know that Luis is not alone and that we are here for him.”

Why, Garcia asked, would Osuna, who expressed his love of murder, have a cellmate?

“(Romero) was soon eligible for parole,” Garcia said. “My mother, my sister and I always hoped to see him back home one day, but that hope died.”